Super Mario Run charged out on December 15th, three days ago as of this writing. While its sales have skyrocketed as we’d expect, the game is currently suffering a shocking 2.5 star rating. However, these low ratings mask a brilliant game. While players rightly complain about the monetization structure, always-online requirements, and other issues surrounding the experience Super Mario Run shines like an invincibility star when you’re actually playing the game.

Dismissing Super Mario Run as a late-comer to the runner genre is a mistake. The game’s design is a study in elegance and skillful adaptation. Super Mario Run doesn’t feel like a Mario-themed mobile game. It feels like you’re playing a classic Mario platformer with just one button.

Let’s take a look at some classic Mario gameplay.

This is a world record speedrun, so it might not look like your own experiences with the original Mario Bros. However, this is the core of the game. You move to the right of the screen and time your jumps. If you time your jump well, things work out for you. If you don’t, you hit a setback. At its core, Mario Bros. is all about timing your jumps.

Super Mario Run’s gameplay ends up looking very similar to the Mario Bros. speedrun. Despite having only one button to work with, the game focuses in on the core player input: timing jumps. It automates the rest for you. They focused on the essence of what makes Mario work and stripped away everything else.

However, a good Mario level often isn’t played just holding down the right button. What about those times when you need to stop for a second? For example, what if you need to time a jump carefully onto moving platforms or to wait for an opening on a boss? 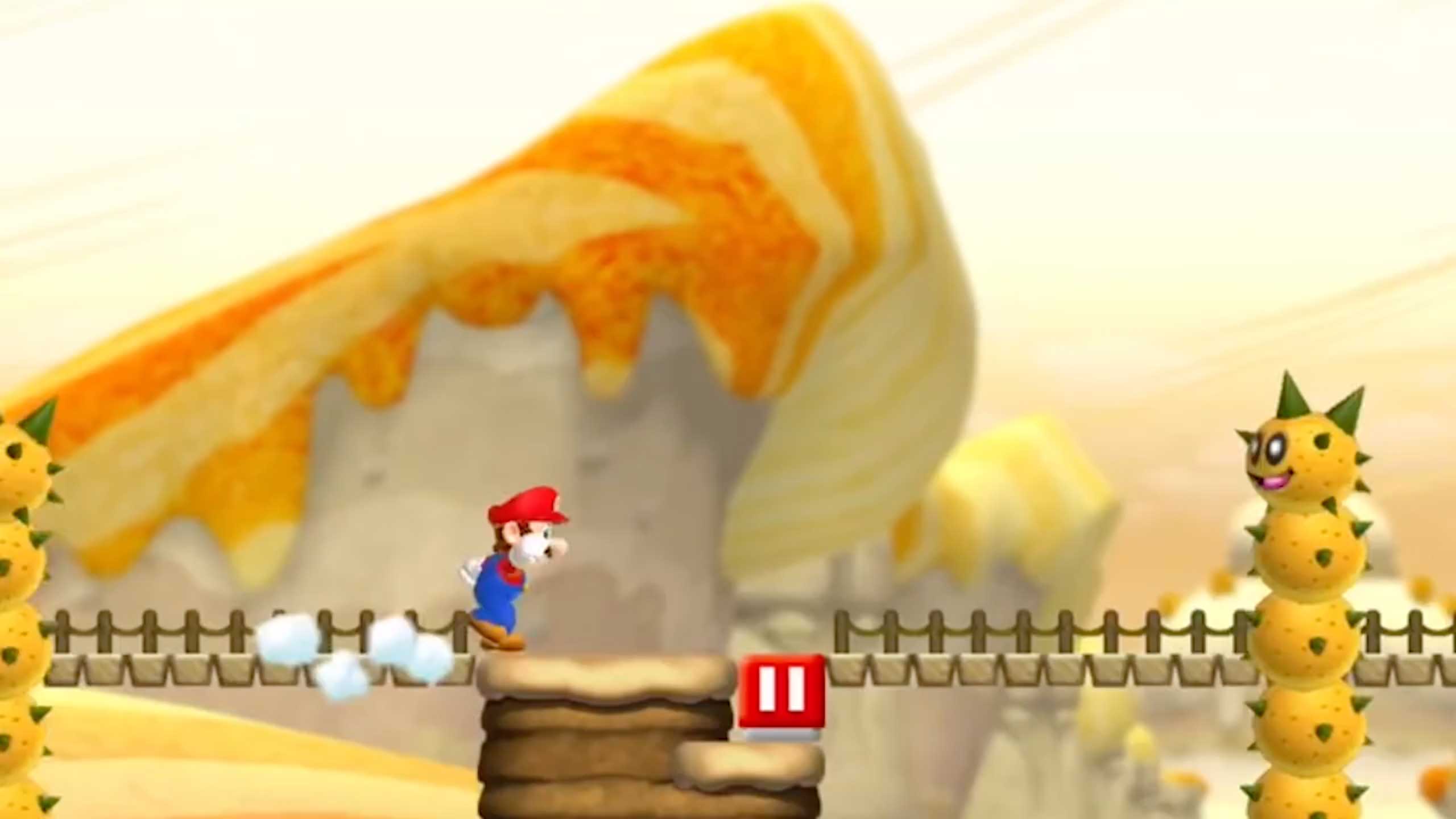 See that red brick with the pause sign? That’s their answer. The moment Mario runs on top of that brick he’ll stop moving until you tap the screen again. Likewise, when landing on a moving platform Mario will automatically run to the center of the platform and wait as though there was a pause brick there. This means you’re always perfectly set up for your next timed jump. The layout of coins also works around the game’s needs. Instead of being scattered across the screen in half a dozen mini platforming challenges you can optionally engage in, the coins form directional paths through the levels. One of the best examples of this are the arrows. 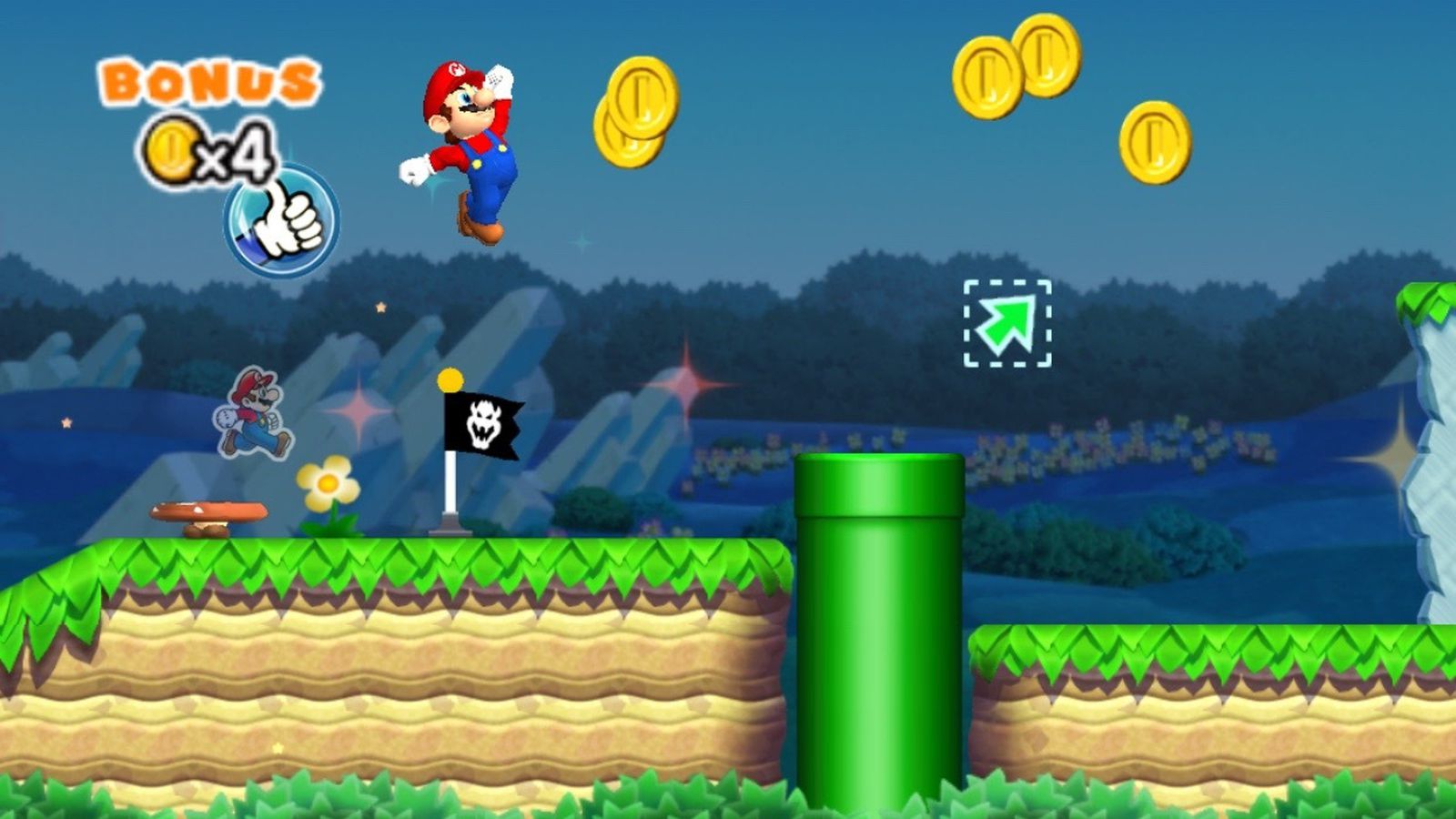 See that green arrow? Touching it will create a path of coins extending from its tip that otherwise won’t appear. While a player might otherwise fall diagonally through a coin path that already exists, the arrow gives players a focused section of the screen to jump in and a direct payoff right after. It also helps players mentally parse their paths going forward without cluttering the screen with golden coins. It’s these kinds of small decisions that really make the game hum.

The designers also used a different kind of arrow in order to get some added flexibility in their level design.

See those blue arrows on the ground, pointing to the left side of the screen? If you jump while on those arrows, you’ll jump backwards. This coin pattern sets up a fancy loop, where you pick up the coins on the ground while running forward, then time your jump to flip backwards up the path to the pink coin and down the other side. The use of these arrows, along with wall jumps that provide a similar backwards leap, gives the designers a lot more flexibility.

Completing levels without caring about the coins is often easy, but following the coins creates an ‘extra credit’ motivation that’s even more accessible than Flower’s similar system. After all, you need to actually trigger all the flowers in an area to complete that section of Flower. In Super Mario Run, the coins are clearly desirable but they’re entirely optional for the main levels. You can get as many or as few of them as you wish, but dang does it feel good to get them.

Alright, that goes into some of the tools the level designers use to create the flexible challenges of a great Mario level with a simple one-button system. But what about the enemies? Most players are going to run straight into goombas if they’re always charging ahead full speed.

Repeatedly slamming into enemies would kill the flow. Instead Super Mario Run takes a similar philosophy to enemies as it does with the coins. Running straight into an enemy on the ground doesn’t kill you, Mario gracefully vaults over them. However, if you hit Jump while vaulting you get a bonus depending on the mode you’re in. This keeps you in the flow of the level.

The game also gets extra use out of each level by scattering different patterns of bonus coins throughout them. The first pattern places 5 pink coins throughout the level in easily reached locations. Completing it while picking up all 5 coins earns you a bonus and unlocks the purple coins. The purple coins are harder to find and require more impressive acrobatics to collect. Completing that challenge brings out the black coins, which demand acrobatics that will take some serious practice to pull off. Because Super Mario Run doesn’t easily allow you to go backwards, collecting all five coins in one run is a much more time-consuming and satisfying feat than in other Mario titles.

You do have a limited ability to go backwards though. Whenever Mario dies, he floats backwards through the level in a bubble. You can tap the screen to respawn him when he’s at the place you want. You can only do this a limited number of times each level, but you can also use one of your bubbles even before Mario’s death if you want to re-do a tricky jump to pick up a special coin.

Finally, levels have time limits attached. Otherwise the players might spend forever in certain wall-jumping sections trying to make a particular jump over and over again. The time limit allows you a reasonable amount of excess time to frustrate yourself in these sections, but ultimately demands you give up and move forward. This limitation might annoy me while I’m experiencing it, but it’s definitely helped my experience overall.

Before we wrap up though, we need to talk about Toad Rally. 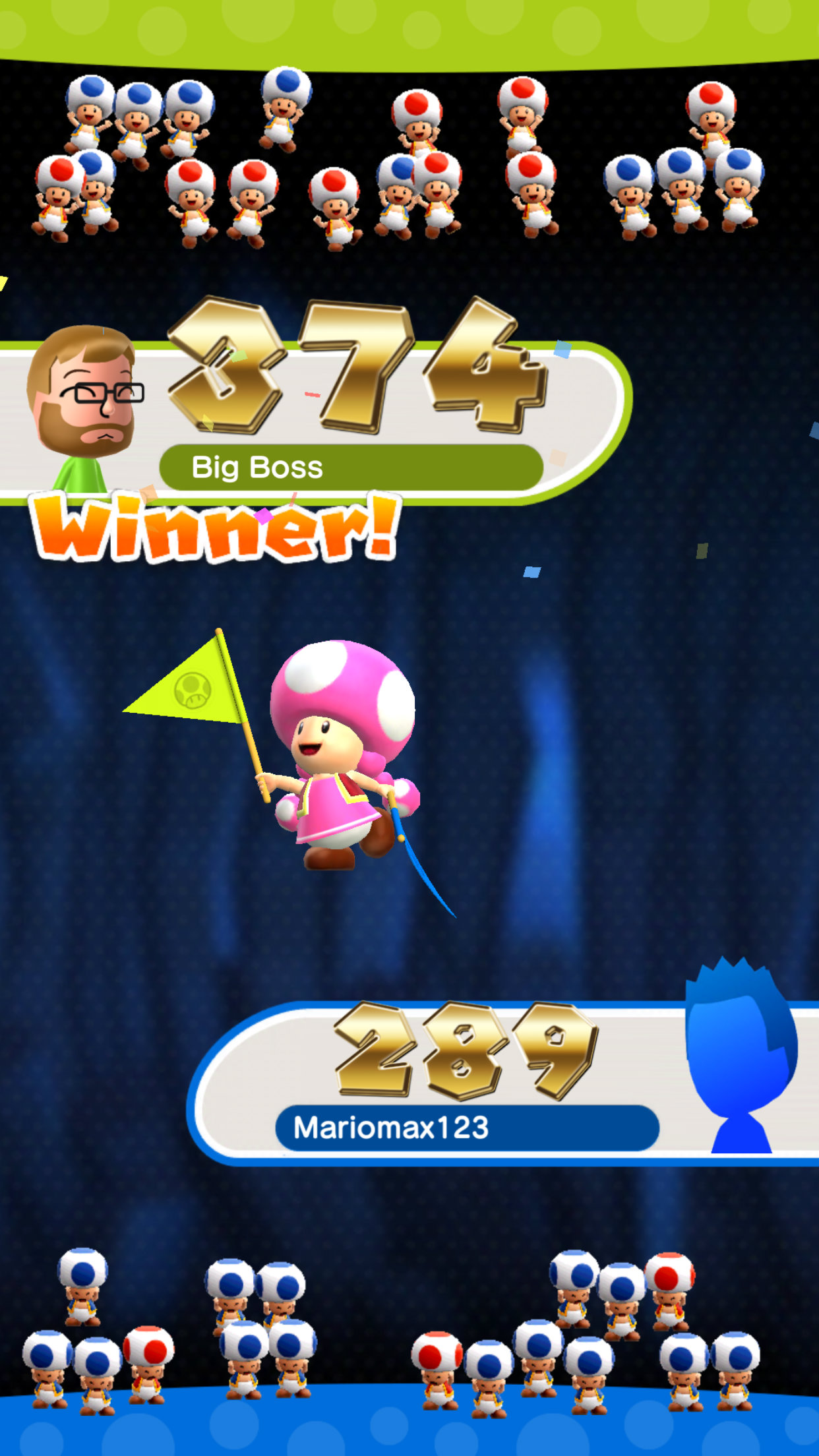 This is the most fun mode of the game. In Toad Rally you compete asynchronously against other players in mashups of various courses. The game claims you’re playing against the other player’s ‘style’. I’m not sure how that’s determined, but the competition feels intense. You race through a coin-rich level, competing to pick up more coins than your opponent and pull off more fancy moves (such as jumping while vaulting over an enemy). In the above left screen, you’re the full 3D Mario at the top going for a jump to pick up that rich path of coins. Your opponent is the 2D Paper-Mario figure taking a path along the bottom of the screen.

The easy design mistake would be allowing players to deny each other coins. This would turn the entire mode into a race to always be ahead, as you’ll get the lion share of all the coins, or else necessitate continually breaking levels into two paths. Instead the designers simply let players engage in mirrors of the same course. You can see what your opponent is doing, and where they are in the level, and you can both pick up the same coins. The designers did maintain one aspect of a classic race, spawning flags throughout the level. The first player to touch a flag claims it and gets a burst of coins. This is your incentive to be further ahead.

Toad Rally also taps into gambling psychology, providing multiple ‘jackpots’ you can hit during your run. Coin Rushes spawn far more coins for you to pick up, while snagging a yellow star vacuums in coins around you for a short while. Having both at once is exponentially awesome.

Toad Rally works by creating increased variety and an immediate goal. You want to beat your opponent right now, not just eventually progress toward defeating yet another level. If you lose, the game provides you with an option to play the same opponent again on the same course. Winners don’t get this option. Because you’re now more familiar with the course you’re likely to do a lot better than you did the first time. This helps replace a negative experience with a sense of justice. You won the rematch.

I’m sure we’ll see many pieces in the upcoming days and weeks about Super Mario Run’s unusual monetization strategy. That’s not my focus here. My focus is on how Nintendo made a Mario game with just one button and why it works so well. Elegance is the most elusive quality of excellent design and adaptations are uniquely challenging.

One thought on “The Elegant Brilliance of Super Mario Run”