Welcome back to Design 101. Last time we talked about one of the most controversial topics in game design, Complexity vs. Depth. If you missed out on that, or any of the previous articles, you’ll be able to find the table of contents at the bottom of this piece.

Today we’re going to be talking about a fundamental concept that too often gets ignored; the Event Structure. Mastering this concept is crucial to creating a powerful player experience and many games have collapsed due to a lack of structural integrity.There’s a lot to get into, so let’s get started.

You’re a director in Hollywood. You’re sitting in your office one day when a major film executive walks in. “I’ve got a great idea.” He says, “You know Star Wars: A New Hope? We’ve done some dial testing, and the results show that the final attack on the Death Star is the most exciting part. Imagine how great that movie would be if it was all a giant climax! What if we throw out all that other stuff and just open the film as the X-Wings are taking off?”

This is going to be a rough meeting.

The human experience is built out of a sequence of events. If someone is telling you what happened to them over the weekend, they’ll describe the events they experienced. “I went hiking in the dunes and I accidentally took the longer trail. I’d only brought along one bottle of water, so I quickly ran out. It took me almost five hours to find my way back to the road where I could get cell reception. Remind me never to sign up for a real adventure, I wouldn’t last a day.”

The same goes for games and, of course, stories. If stories are adventures we experience vicariously through other characters, games are just adventures that we experience ourselves. Stories and games are built out of a series of events that work together to create an overall experience. We call this an Event Structure.

You start explaining to the well-meaning executive that the climax only works because of what leads up to it. Every moment of the movie has been building towards this grand confrontation. Aside from the lack of emotional investment, opening with the climactic battle would make every fight that followed feel smaller by comparison.  It doesn’t make for a good Event Structure.

“Okay,” he says sourly, “Then what makes a good event structure?”

That’s when you bring out the diagram. 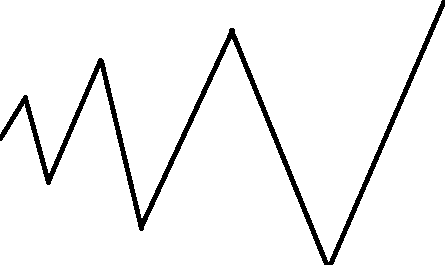 This is what a good game looks like. Each peak and valley represents a different event. An upward slope is a positive event, a downward slope is a negative event. You’ll also notice that the magnitude of the changes between positive and negative keeps rising.

I should emphasize that a game can start with either a positive or a negative event as long as it keeps alternating. This positive ending represents an ultimate triumph. Ending on a negative event would form a tragedy instead.

This probably seems oddly specific. How can all good games be narrowed down into such an arbitrary structure?

Because it’s not arbitrary at all.

The reason you alternate positive and negative events is because human beings quickly adapt to new norms. Just as a person in Florida steadily becomes accustomed to the heat, repetitive positive or negative events quickly lose their emotional impact. In the words of Robert Mckee, “At the first tragedy we cry, at the second we sniffle, at the third we laugh”.

Repeated positives grow equally stale. Winning a game every time you play can quickly lose the thrill of victory. It becomes expected and loses its emotional impact. If you want to create a powerful player experience, repetition just leads to diminishing returns.

The solution is to alternate positive and negative events. The previous negative event creates added contrast with the positive and gives each event more impact. An underdog coming from behind to win a huge game is a much bigger thrill than a team that was comfortably ahead the whole time scoring an extra goal before the buzzer.

There’s a danger to this design.  Alternating positives and negatives can make it feel like no progress is being made. It can create a sense of stalemate, like the story or game isn’t going anywhere. No one likes taking one step forward only to be pushed one step back. How do we solve this?

This is why each event is a bigger change than the previous one. This creates a sense of momentum and progress. You also further magnify the contrast between the escalating events. Your event structure turns into one step forward, two steps back, three steps forward, four steps back until you reach the mountain’s summit or plunge off the side of the cliff.

Let’s see it in action. 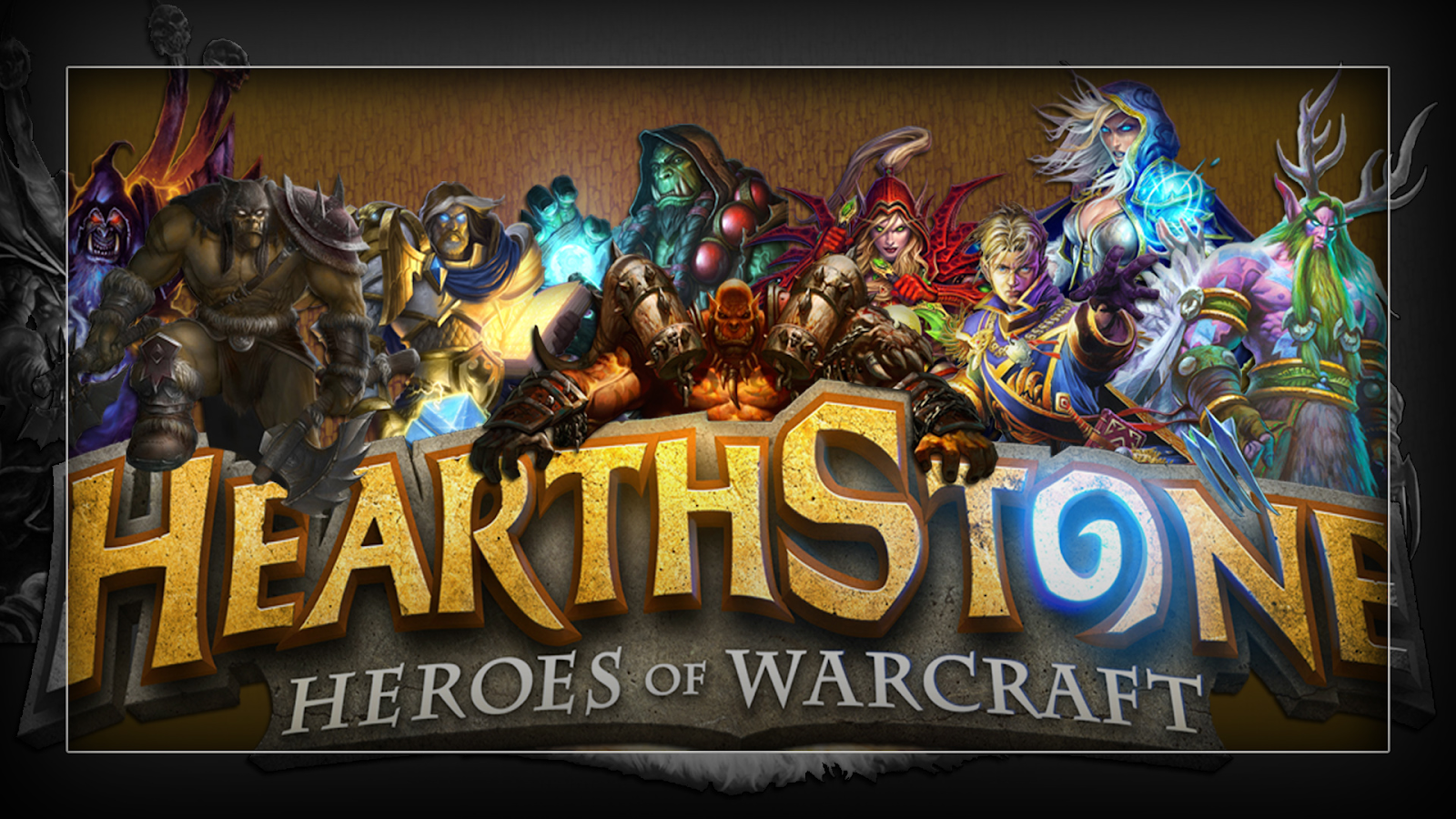 Hearthstone creates an ideal event structure through its core mechanics. Every turn you take is a positive event for you. You get to draw a card, gain a mana crystal and then make plays that further your goals. Likewise, every turn your opponent gets is a negative event. Right away we’ve got alternating positives and negatives. When you lose a game, it’s a tragic event structure. When you win, it’s a triumph.

Furthermore, Hearthstone uses the ramping resource system similar to Magic: the Gathering. Each turn you gain a mana crystal, which is a reusable resource. On turn 1 you have access to only 1 mana. By turn 10, you have access to 10 mana. This means that each turn you can make bigger plays, delivering a larger positive for you and a larger negative for your opponent. It’s the event structure in its purest form.

Starcraft has a similar sense of progression. As you build up over the course of the game, you create larger units to engage in escalating battles until the game ends in a climactic assault.

In League of Legends players gain levels to increase their capabilities. They start by slaying minions and trading small chunks of damage with enemy players. As the game progresses their victories increase in scale, from killing other players to destroying towers, to crushing inhibitors to slaying epic monsters and finally to destroying the enemy’s largest structure; their nexus.

In Super Smash Bros, the more damage you take the further each hit makes you fly. Each impact feels larger than the last until you’re finally blasted off the screen.

Portal’s earliest levels are quick and easy. The later ones should take you longer to complete. As later  levels incorporate more puzzles on your way to reach the chamber lock, completing each level creates a larger sense of satisfaction due to the perceived increase in the level’s scale.

The designers of Portal could easily have broken each puzzle into a separate level, like they do at the beginning. By increasing the number of puzzles in each level, they increased the emotional impact of beating each of those levels as well. Furthermore, the puzzles at the start of a new level tend to be easier than the ones at the end of the last level. This easier puzzle creates a positive sense of confidence in the player to contrast with the difficulty of the previous one. It helps them refresh both their mental energy and their emotional tank.

But few games have done this better than the opening of a certain action rpg. Let’s talk about Dark Souls. 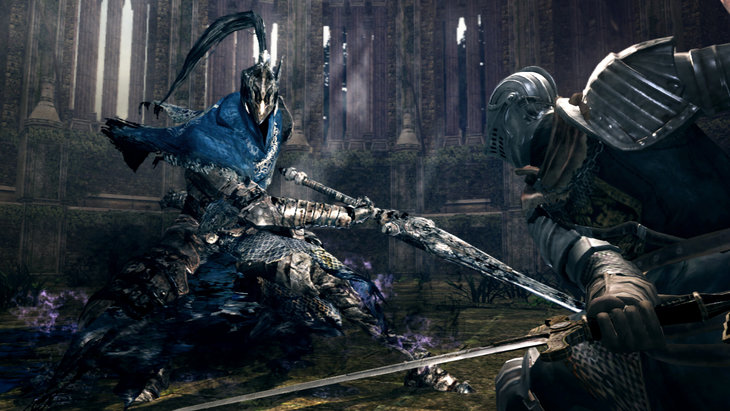 You begin by creating your character and picking an appearance you like. Your freedom and appearance is then stripped away and you find yourself disfigured in a jail cell. This cosmetic loss forms the first event, starting things off with a minor negative.

Things turn positive when you encounter your first enemies.You’ve been told this game is extremely hard so you’re a little cautious. However, you find the skeletons easy to destroy and suddenly feel a rush of confidence. You’re cutting through an incredibly hard game without a problem.

Then the asylum demon shows up. A gigantic behemoth towering over you with a savage club that seems larger than your whole body. Text appears that labels this gigantic terror as merely a Rank 1 enemy. Oh boy.

If you try to fight the demon you’re probably killed repeatedly as your pathetic attacks barely scratch the demon’s life bar. This is a significant negative and counterpoints the initial rush of confidence. Most are forced to flee from the monster eventually.

After fleeing, you acquire some better equipment and a stronger weapon. This positive is likely challenged as you suddenly have to negotiate nasty traps and enemies that are much more punishing than most games’ main content – let alone their opening tutorials. After slowly becoming accustomed to the patterns and controls, you’ll eventually scrape through these challenges.

Continuing to explore, you soon find yourself standing on a ledge above the asylum demon. You didn’t just come back to fight your foe, the tables have visually turned. Now you’re the one looking down on your enemy. The demon is literally beneath you.

It’s time for the climax. You leap off the ledge and perform a Plunge attack, blasting away half the demon’s life bar in one swing. The monster that had once seemed unkillable has been broken in half with your new power. It’s on!

Once the demon is conquered, you feel a rush of victory that psychologists sometimes call fiero and the screen blazes with text declaring your triumph. Your previous humiliating defeats have been overcome in a climactic victory.

The Exception (That Proves the Tool)

It’s important to understand there’s a difference between a “rule” and a “design tool”. Rules are things you have to follow. Tools are things that work. The Event Structure is a design tool because it reliably produces a certain experience. If you find other ways to create that experience, that’s fine as well.

For example, there’s a way to follow a positive with a positive (or a negative with a negative). If the second positive is so much larger than the first that it makes the first look irrelevant by comparison, you’ll still feel a strong emotional impact.  Your kid doing well on the SAT is a positive. If your kid then gets accepted to Harvard on a full scholarship, that’s a whole other magnitude of wonderful.

Unfortunately, this tactic isn’t sustainable. You can’t keep exponentially increasing positives or negatives for your whole game, you’ll simply run out of room. This tactic should be used sparingly, just enough to surprise your players. If your players start taking your positive/negative event structure for granted, it can lessen each event’s impact in the process.

A great event structure helps make a great game. Likewise, the coolest game on paper can collapse due to structural failures.

Always remember, your job isn’t just to design a fun 30-second gameplay loop. Gameplay loops are very important to a game’s experience, just like good dialogue and description is important to a book. However, you need to ensure the moment to moment gameplay works together to build a satisfying event structure for your player’s overall experience.

Fighting a monster in Dark Souls is fun. The thrill built by the overall opening is priceless. Imagine if your first encounter with the giant tutorial boss was on the ledge and you easily killed it, without the intense negative of being overwhelmed by it at first.

It would feel just as meaningless as opening Star Wars with the final battle against the Death Star.

One thought on “Design 101: The Structure of Fun”